David Richardson, a farmer who lived in the Trinity Road area of Ancaster since his arrival from Scotland in 1836, was the owner of the land running from the present day 339 to 347 Wilson Street. In 1872, David Richardson built the two-story stone house (originally called “Sunnyside”) on Wilson Street as a wedding present for his son Dr Henry Richardson and future daughter-in-law Sarah Catherine Egleston, who were married on June 11, 1873. 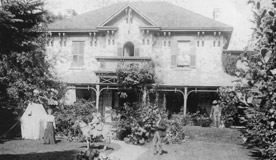 The house photographed in 1903

The house was solidly made of 15″ stone blocks cut from the neighbouring quarry and was designed with many of the popular Italianate brackets and influences of the time.

Mr David Richardson had the house specially designed for Henry with a built-in vestibule, waiting room and doctor’s office built on the side of the house. The vestibule was even equipped with a listening tube connected to the doctor’s bedroom for patients calling in the night. All of the rooms in the house had high ceilings, pine or maple floors and oak doors. The waiting room was painted in two shades of green, a dark shade on lower half of the wall, with a lighter shade above. Between the two was a 2 inch maroon border. Just below the ceiling was a dark green stenciled frieze.

The door to the servant’s stairway was one of three large doors dominating one wall of the kitchen. The other two doors led to large cupboards in the wall backed by the outer wall of the house.

At the front of the house, two second-floor balcony doors looked out onto the street and a long wooden porch was connected to the base of the balcony. Beside the house was an orchard and a field.

The front door, of curiously jointed oak panels, led out to a garden fountain and central walk leading to the outer gate and sidewalk. Behind the house was a number of small sheds and the outhouse.

On October 28th, 1894 Dr Henry died and then in 1898 the house was sold to Dr George Devey Farmer who carried out his practice on the premises continuously (except for 4 years when he was overseas during World War I), until his death in 1928. The Farmers made a considerable number of improvements of utilities, but made few structural changes. 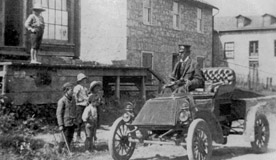 Dr Farmer in his 1902 Pope automobile, the first auto in Ancaster.

Dr Farmer installed inside plumbing, heating and electricity in the house as well as installing the first private telephone in the district and constructed a garage in the backyard to house his automobile, only the second in Wentworth County. In 1929, Dr James Homfrey Roderick bought the house after Dr Farmer’s death and owned it for three years. The only change that Dr Roderick made was to remove some old heating pipes from the dining room. The orchard and field had already been sold.

By 1932, the main house had been empty for a number of years until Thomas Farmer moved in temporarily to look after the premises.

The house was then sold for $5,000 to John Grant, who moved there in 1939 with his wife and four of his five daughters, Millicent (later Allen), Florence (later Redding), Kathleen (later Smith) and Esther (later Holcomb). Mr Grant’s eldest daughter, Susan (Millar), was married and serving as a missionary in Nigeria at the time. Mr Grant did a great deal of remodelling.

He tore down the wooden porch which was in need of repairs and took out the front fountain, walk and garden. The vestibule and the listening tube were also taken out of the waiting room and a large stucco addition was built on the back of the doctor’s office with a door leading to the side lane.

Eventually, the doctor’s office and the addition were made into a separate apartment for one of the daughters who married, and three of the second floor rooms were converted into another apartment.

In the meantime, the Grants constructed a vestibule for the front door, improved the bathroom put in by the Farmers next to the servant’s room, and installed a second bathroom in a walk-in, room-length closet in the master bedroom.

Most of the wash basins put in by the Farmers were left in the bedrooms, where they were originally installed for private bathing, except for one in the second largest upstairs bedroom, which was later used by one of the married sisters as a living room.

The balcony doors were nailed shut and converted to half wood and half glass. The Grants also removed the pantry and the heating stove. Unfortunately, the marble fireplace in the living room had been damaged by moisture during the period that the house had been vacant, so the Grants painted over the large brown stain in the marble. The inner oak doors and upper floors were also painted and a dark stain was put on the lower hall floors.

When the bathroom was improved, the Grants took out the servant’s stairway and nailed down the trapdoor. The Grants also sold half an acre at the back of the property to Ancaster Memorial School.

John Grant died in 1949 and his widow, Elizabeth, eventually sold the property to Albert F Redding, a son-in-law of the Grants, who lived there until 1965 when the house was sold to Dr John Ashworth. 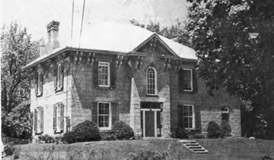 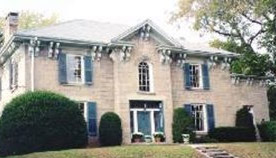 The house photographed in 1999

By the time the Ashworths moved in, no discernible trace could be found of the servant’s stairway and the garage had been burned by vandals.

When sanding and stripping the hallway floors, they did discover, however, that the floors in the waiting room were uniquely fashioned with two types and colours of maple. The Ashworths also installed a specially ordered single window to replace the old second floor balcony doors and tore out the remaining bedroom sinks and downstairs closet. The original windows in the house were also replaced at this time except the kitchen window, and the main staircase was replaced also.

After 130 years of existence and six families later, the house still stands as solid as ever, looking out over Wilson Street. As Mrs Ashworth said in 1977, “It’s the kind of house that makes you feel at home, the kind you adopt. Our children don’t want us to sell it. After all, it may well last another hundred years.

On 11th December 1978, the Corporation of the Town of Ancaster passed by-law 78-88 designating the property as “lands and building of historic value, architectural value and interest” under the Ontario Heritage Act. The by-law intends that various features of the building be preserved, specifically the front and side facades, external doors and windows, the roof, chimneys and cornices. The by-law states:- “it is set in spacious grounds with large trees, and its siting in a slightly raised position gives this quality house has an imposing appearance, important to the Wilson Street streetscape.”

In 1995 the house was sold to Anthonius and Margaret Verbruggen who made few changes.

In 2001, the property was bought by Derek and Zinnia Watts who intended to retain and restore some of the original features of the property as they converted the building to become the new home of The Spa at Ancaster.

Structural repairs were necessary as it was noted that the house had suffered considerable sagging in the centre, with the result that all the upper floors sloped toward the main hallway. It was established that this was due to flexing of the main support beam which runs across the whole width of the house. Since the original lath and plaster showed no signs of cracks, it was assumed that the damage had occurred when the property was first built and had simply been an accepted “feature” of the house ever since.

Additional foundation pads were installed in the basement and steel beams and columns added to support the floors and internal walls. During this time, evidence of the extremely steep servants stairway was discovered (it had a rise of 11″ on each 7″ step). 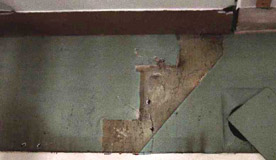 Evidence of the steep servant’s stairway